Growing up in Western Pennsylvania, you learn to appreciate what comes from underground as much as you appreciate the rest of the Earth’s riches.  Hard cold winters transition into Spring when the sun warms the soil and up pop green pointy stems that will become a parade of beautiful flowers beginning with crocus, then daffodils, then tulips.

In my little county, where my family has had a presence since the 1700’s, coal is the cash crop.  Local men and women, including many from my family, have ventured into the pits to “harvest” the creation of a flood, an ice age, and eons and eons of carbon materials compression .  Other by-products of these fossils decomposition include natural gas and other petroleum related liquids.  The jobs created from this underground economy had given many a solid middle class way of life.  Financial benefits have been costly though.  Black lung, dangerous work conditions resulting in injury, methane explosions, and career shortening hard work  go hand in hand with the garnered riches.

Other riches lie beneath our beautiful rolling Appalachian foothills such as clay soil.  In the mid to late 1800’s stoneware was a popular form of storage container in America.  Many communities boasted a potter or two.  But little Greensboro, Pa, sitting along the Monongahela River became well-known for its pottery.  One such pottery, was owned by a distant family member, and made quality pieces that are still revered today.  The clay for these pots were mined along the river and hauled to the pottery for these beautiful creations. 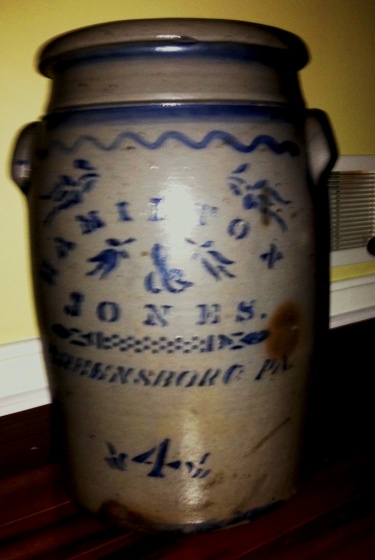 Most rewarding among our underground riches has been our contribution to resistance whether it be unfair taxation by a newly formed Federal government or the movement against slavery prior to the Civil War.  Western Pennsylvanians engaged in helping the Underground Railroad provide slaves a safer journey toward freedom  by giving safe housing, transportation or other forms of care.  In Washington, PA less than a block from the home of David Bradford, who led an underground movement called the Whiskey Rebellion in the early days of America, is the home of Dr. Francis Julius LeMoyne, an abolitionist and builder of the country’s first crematory. Dr. LeMoyne’s large home provided safe haven to many who chose their path to freedom to the free states or Canada.  Dr. LeMoyne was part of a large network of people who opened their hearts and homes in the flight to freedom.

Remember to look beneath as there are many beautiful things down there forming our foundation.

While never sure that I had found my true calling, I excelled at my job. I enjoyed the work and took pride in what we accomplished. Unfortunately a long career can devolve into a joyless struggle. Life must go on and My Second Act, Scene One is about that journey. Please join me.... View all posts by lbell2014